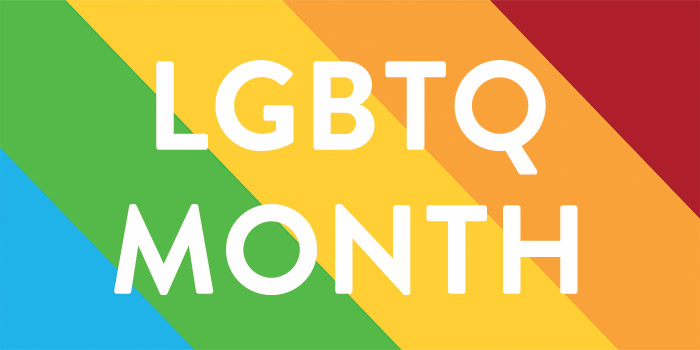 Monday, June 4  (1p.m. - 3 p.m., Room 3305)
FILM FESTIVAL I: We Exist: Beyond the Binary
We Exist: Beyond the Binary is a film that highlights the lives of those whose gender identity is neither of male or female experience. The “We Exist” movement is a conversation of facing gender constrictions instilled by our society. The film follows non-binary individuals and aims to be assertive with proclaiming the non-binary experience and push truth and progression. There will be student-led discussion and food provided.

Wednesday, June 6   (10 a.m. - 3 p.m., Library Quad)
COLLEGE HOUR: HUMAN LIBRARY
Don’t judge a book by its cover. The Human Library™ is designed to build a positive framework for conversations that can challenge stereotypes and prejudices through dialogue. The Human Library gives you the opportunity to “check out” a real person instead of a book. With keynote speakers Courtney Cooper and Missy Hart. There will be food provided including hotdogs, popcorn and snow cones.

Thursday, June 7   (Noon - 1 p.m. Hearthside Lounge, Room 2313)
PANEL PRESENTATION: How to be Assertive When it Comes to Online Harassment
Does somebody repeatedly leave uncomfortable/inappropriate comments on your social media account? Has someone shown signs of online stalking? Have you experienced or are experiencing online bullying? Social media has become a big component of our daily lives, and We for She and Gender Sexuality Awareness Club understand that assertiveness is critical to developing healthy boundaries both in-person and online. With Psychological Services presenting, we will have a workshop for students on how to be assertive if you are harassed online. Pizza and drinks will be provided!

Tuesda, June 12   (Noon - 1p.m., Campus Center Plaza)
AMATEUR DRAG SHOW & BBQ
Put on a new persona and join us in exploring gender expression to the extreme! Amateur drag day is happening on campus and all are welcome. We will have games and entertainment and barbecue to match. You've yet to see a party like this!

As a speaker from Parents and Friends of Lesbians and Gays (PFLAG), Timothy Flaherty supports a world where diversity is celebrated, especially among people in the Lesbian, Gay, Bisexual, Transgender, and Queer (LGBTQ) community. He shares personal narratives regarding LGBTQ identity, stigma, life challenges, coping and wellness, and supportive resources. His hope is that all people are valued, respected, and affirmed for their sexual orientation, gender identity, and gender expression.

Wednesday, June 13   (Noon to 1p.m., Hearthside Lounge, Room 2313)
LECTURE SERIES II: OUTLET PRESENTS GENDER 101
Look beyond the binary concept of gender and hear about resources and advocacy for the transgender community. This workshop is presented by Outlet, a youth-centered organization that respects people while honoring their differences. With youth centers in Mountain View, Redwood City and San Mateo, Outlet strives for social justice, fairness, and equality for all. Complimentary pizza!

Since our founding, America has advanced on an unending path toward becoming a more perfect Union.  This journey, led by forward-thinking individuals who have set their sights on reaching for a brighter tomorrow, has never been easy or smooth.  The fight for dignity and equality for lesbian, gay, bisexual, and transgender (LGBT) people is reflected in the tireless dedication of advocates and allies who strive to forge a more inclusive society.  They have spurred sweeping progress by changing hearts and minds and by demanding equal treatment -- under our laws, from our courts, and in our politics.  This month, we recognize all they have done to bring us to this point, and we recommit to bending the arc of our Nation toward justice.

Last year's landmark Supreme Court decision guaranteeing marriage equality in all 50 States was a historic victory for LGBT Americans, ensuring dignity for same-sex couples and greater equality across State lines.  For every partnership that was not previously recognized under the law and for every American who was denied their basic civil rights, this monumental ruling instilled newfound hope, affirming the belief that we are all more free when we are treated as equals.

LGBT individuals deserve to know their country stands beside them.  That is why my Administration is striving to better understand the needs of LGBT adults and to provide affordable, welcoming, and supportive housing to aging LGBT Americans.  It is also why we oppose subjecting minors to the harmful practice of conversion therapy, and why we are continuing to promote equality and foster safe and supportive learning environments for all students.  We remain committed to addressing health disparities in the LGBT community -- gay and bisexual men and transgender women of color are at a particularly high risk for HIV, and we have worked to strengthen our National HIV/AIDS Strategy to reduce new infections, increase access to care, and improve health outcomes for people living with HIV.

Despite the extraordinary progress of the past few years, LGBT Americans still face discrimination simply for being who they are.  I signed an Executive Order in 2014 that prohibits discrimination against Federal employees and contractors on the basis of sexual orientation or gender identity.  I urge the Congress to enact legislation that builds upon the progress we have made, because no one should live in fear of losing their job simply because of who they are or who they love.  And our commitment to combatting discrimination against the LGBT community does not stop at our borders:  Advancing the fair treatment of all people has long been a cornerstone of American diplomacy, and we have made defending and promoting the human rights of LGBT individuals a priority in our engagement across the globe.  In line with America's commitment to the notion that all people should be treated fairly and with respect, champions of this cause at home and abroad are upholding the simple truth that LGBT rights are human rights.

There remains much work to do to extend the promise of our country to every American, but because of the acts of courage of the millions who came out and spoke out to demand justice and of those who quietly toiled and pushed for progress, our Nation has made great strides in recognizing what these brave individuals long knew to be true in their hearts -- that love is love and that no person should be judged by anything but the content of their character.  During Lesbian, Gay, Bisexual, and Transgender Pride Month, as Americans wave their flags of pride high and march boldly forward in parades and demonstrations, let us celebrate how far we have come and reaffirm our steadfast belief in the equal dignity of all Americans.

NOW, THEREFORE, I, BARACK OBAMA, President of the United States of America, by virtue of the authority vested in me by the Constitution and the laws of the United States, do hereby proclaim June 2016 as Lesbian, Gay, Bisexual, and Transgender Pride Month.  I call upon the people of the United States to eliminate prejudice everywhere it exists, and to celebrate the great diversity of the American people.

IN WITNESS WHEREOF, I have hereunto set my hand this thirty-first day of May, in the year of our Lord two thousand sixteen, and of the Independence of the United States of America the two hundred and fortieth.

Excerpt from Presidential Proclamation.  Source: The White House, Office of the Press Secretary.