Asian-Pacific American Heritage Month is a national celebration to pay tribute to the contributions generations of Asian and Pacific Islanders have made to American history, society and culture. 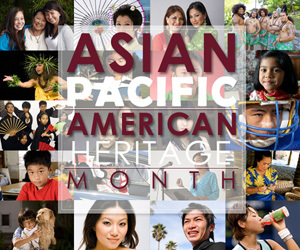 Like most commemorative months, Asian-Pacific American Heritage Month originated in a congressional bill.  In June 1977, Representatives Fran Horton of New York and Norman Y. Mineta of California introduced a House resolution that called upon the president to proclaim the first ten days of May as Asian-Pacific Heritage Week.  The following month, senators Daniel Inouye and Spark Matsunaga introduced a similar bill in the Senate.  Both were passed.  On October 5, 1978, President Jimmy Carter signed a Joint Resolution designating the annual celebration.  Twelve years later, President George H.W. Bush signed an extension makiing the week-long celebration into a month-long celebration.  In 1992, the official designation of May as Asian-Pacific American Heritage Month was signed into law.

Information and graphics  from Library of Congress